Established in 2005, and headquartered in the Washington DC metro area, C. Mack Solutions (CMS) was founded to bring Agile expertise to all levels of an organization, ensuring our clients benefit from this flexible and dynamic approach. We achieve this by aligning industry leading Agile technology professionals with client needs in order to deliver innovative solutions that exceed expectations. CMS believes that developing long term partnerships with our customers is the key toward helping our clients achieve success with their missions. To build those relationships, CMS drives the principles of integrity, agility, and delivery throughout our organization. C. Mack Solutions’ approach has yielded successful results for numerous clients throughout the public sector including the Department of Defense, US Customs and Border Protection, and the Department of the Interior. Additionally, CMS was accepted in the prestigious U.S. Department of Homeland Security’s Mentor-Protege Program. 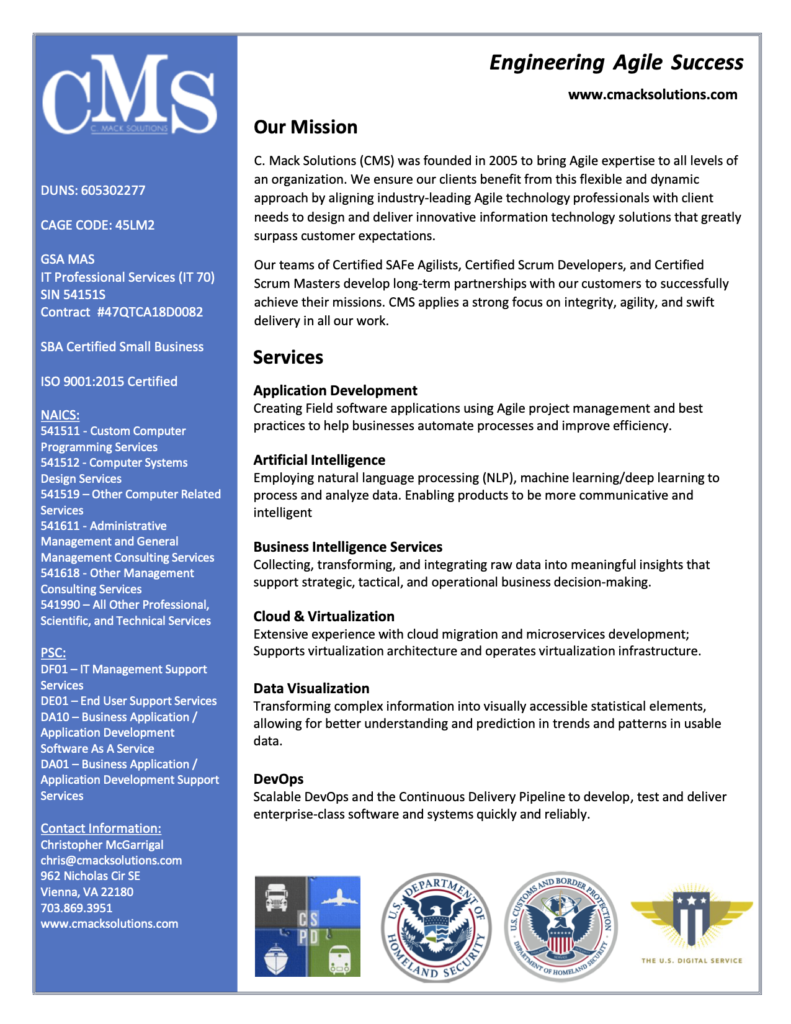 Our team blends deep industry experience with Agile Certifications & Quality Certifications to ensure our clients are getting informed and impactful solutioning. We have a proven track record of bringing innovative solutions that enable the missions of our clients. Our focus on long-term partnerships ensure that our success is aligned with that of our clients. CMS is not just a place to work, it’s a community of supportive and like-minded individuals that understand we can achieve great things when we work together. FOCUS ON THE TEAM

The best technology solutions can only be developed as a team. We work together and succeed together. Our passion is to fulfill the customer’s mission with innovative and sound solutions. We ask, at each turn, if this benefits our customer in the long term. 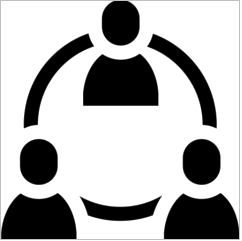 Our culture fosters trust. We trust in the expertise and judgment of our collaborators. Every contribution is valued. We believe in agility, flexibility, and constant growth. Expect challenges and prepare to pivot. COMMIT TO THE COMMUNITY

We value giving back to our local community by sharing our talents, in-kind support, donations, and time. After graduating from the University of Virginia with a B.S. in Commerce in 1996 and an M.S. in MIS in 1997, I joined Price Waterhouse as a consultant. Through my first 6 years of consulting for Fortune 500 companies and Federal clients the company I started with migrated from Price Waterhouse, to PricewaterhouseCoopers, and ultimately to IBM. The training and experience I received at these top tier clients, gave me a great foundation to work from but also left me with a desire to work for a smaller company. I left IBM in 2003 and worked for a few medium sized consulting firms where I was able to focus on delivering SAP solutions to the Public Sector.

In 2005, I was able to leverage the experiences I had had over my first decade of consulting and founded C. Mack Solutions based on a passion for delivering innovative solutions and building long-lasting customer relationships. We have grown into an organization committed to Agile Best practices and lean solutions that deliver high value to our clients. We recruit like-minded individuals who are driven to demonstrate the power of Agile Methodologies to our clients. I’m constantly amazed by the impressive accomplishments of our team and the value we have been able to deliver to our clients.

Outside of the office, I stay busy chasing four young children that are currently participating in activities that include Tae Kwon Do, Gymnastics, Tee Ball, and Soccer (just to name a few). I also enjoy running and cheering on UVA Athletics! After graduating from SUNY StonyBrook in 1990 with a B.S. in Industrial & Organizational Psychology, conferred with Honors, I joined CACI supporting the US Department of Justice. After about a year, I applied for federal employment and spent the next 4 and half years working for both the US Department of Labor and US Department of Commerce. At that point, I pursued a graduate degree and obtained a M.S in MIS from the University of Virginia in 1997. After graduating, I worked in various roles at CGI (formerly AMS) and IBM Business Consulting Services (formerly PwC Consulting) before joining Excella Consulting in 2005.

At Excella, I led the strategy and execution for Excella’s Federal Sector Practice which drove growth of the company from a dozen employees to over 300 employees with revenues exceeding $70M and accounting for 75% of the firm’s revenue. In my final role, I led the Strategic Growth Practice which leveraged success in the federal sector to build out a dedicated BD team to expand Excella’s footprint across all sectors while exploring M&A.

Before joining C. Mack Solutions, I was the Chief Operating Officer for VariQ providing executive oversight for the entire delivery organization while spearheading recompete efforts.

On a personal note, I reside in Alexandria, VA with my wife, Calaneet and dog, Hugo. I'm an avid cyclist and gardener, and enjoy traveling and outdoor recreation especially boating. LINKEDIN
Graduating from Lafayette College in 2002 with a degree in Computer Science, just as the tech bubble had burst, I began my career working for Metier Ltd. as a scheduler supporting U.S. Customs & Border Protection. I gained an understanding into the value sound schedule management can bring to an organization, but found that where my interests lay was in helping a team to achieve their milestones, rather than simply reporting upon their progress.

In 2006 I joined Lockheed Martin, and over the next 6 years I worked as a functional manager, driving teams of developers, testers, and systems engineers to deliver innovative solutions for mission critical systems within U.S. Customs & Border Protection. By 2011 the concepts of Agile development had begun to gain significant momentum within the industry. The idea of assembling a small, cross functional team of individuals, to support the delivery of an end-to-end user capability resonated strongly with me. So I joined a small commercial venture at Lockheed Martin as Scrum Master, where over the next year I led a scrum team through the prototype phase of a product Lockheed Martin had targeted for sale within DHS.

This led me in 2012 to join C. Mack Solutions, a company committed to delivering Agile best practices and Lean solutions to our customers, at a value which cannot be matched by the large system integrators. Initially working with several of our partner companies to bring Agile transformation to the CBP Passenger Systems Directorate’s TECS Modernization program, I’ve since returned to the Cargo Systems Directorate where I oversee delivery across the program.

Outside of the office, I have three young daughters all focused on becoming the next great ballerina, and whom I strive to make passionate fans of the Washington football team! 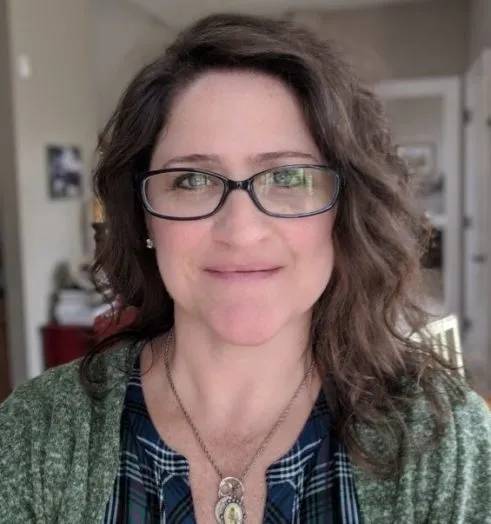 After graduating from Auburn University, I started my software development career at CSC Global PeopleSoft Practice (formerly The Pinnacle Group). I enjoyed my days as a traveling consultant, growing my experience with each new client, and learning new skills from a talented group of co-workers.

I continued my development career with Northrop Grumman with various clients, working my way up the leadership path. Moving through these career roles allowed me to learn about the various life cycles of a software development project and understand the importance of strong client relationships. After taking a few years to start a family, I started back with Northrop Grumman in the program management practice.

Seeking an experience to work with a small business that was willing to accommodate my work/life balance, I was lucky to find CMS, who I joined as their Business Operations Manager. I have found working with a growing small business to be exciting, rewarding, and challenging. Every day is a new and exciting adventure with CMS and I would not want to be any other place!
Outside of work I enjoy spending time with my husband, three children and our doggie, Riggs. We love to camp, hike, and take road trips. I also enjoy volunteering to help with their many activities and cheering on my Auburn Tigers! WAR EAGLE!! After graduating from James Madison University with a B.A. in Political Science in 2011, I went on to obtain a Master of Public Policy degree from George Mason University in 2013.

Prior to joining C. Mack Solutions, I worked in sales, account management, small business management, and the hospitality industry. My excitement for being part of a growing small business led me to CMS. As a Business Development Associate at CMS, I’m responsible for continuing to strengthen our existing relationships as well as identifying new opportunities in the ever-expanding Federal IT Solutions market.

In my free time, I enjoy playing guitar, socializing with friends, and watching soccer, football, and hockey. Let’s Go Caps! After graduating from James Madison University with a degree in Psychology and Early Childhood Education, I spent several years teaching in Fairfax County Public Schools. I then went on to graduate from George Mason University with a Masters in Linguistics combined with TESL(Teaching English as a Second Language) and ESOL (English Speakers of Other Languages) certifications.

Working with and supporting our community has been a passion of mine for many years. I am thrilled to be in the role of CMS Community Outreach Director, as it allows me to leverage my background of volunteering, teaching, and supporting our community. Transitioning from being an active volunteer to this role has allowed me to explore how CMS can best support our surrounding communities. Over the last 15 years, CMS has been involved with many local charities and organizations such as Food for Others, Second Story, Doorways for Women and Families, and Vienna Youth Soccer. Most recently we created the CMS Pathways Scholarship and hosted a food packing event with CMS employees benefitting Food for Others.

Outside of work, you will likely find me transporting my four kids to one of their many activities, reading a good book, or taking the newest member of our family (a Yorkie-Poo named Pepper Potts) for a walk. 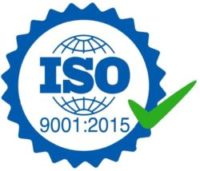 Trust our team to help you out with all your IT consulting needs. Contact us for more information.

Talk to Our Team
Scroll To Top